I’ve been doing long commutes for work lately, and although the early mornings are a killer I’ve quite enjoyed the extended bouts of staring out the window of a train, daydreaming. Over these weeks of slow commuting, I’ve realised that I spend a LOT of time thinking about sewing, clothing and what I want to wear next season. A lot. If that makes me sound totally shallow, in my defence I also do dedicate some thoughts to climate change, the horror of Trump, feminism and…snacks (speaking of Trump, how hilarious is this pin cushion drama that went down on Ravelry).

But I do return often to clothes and how I’m going to make them, and one of my favourite textile-related daydreams is the ol’ celebrity wardrobe raid. I can happily spend an hour-long trip forcing myself to choose one – only one – celebrity whose wardrobe I would gladly trade for. I’ve got the list down to five finalists and the winner changes by the day: will it be Alexa Chung’s ruffles; or Sarah Jessica Parker in SATC (Carrie’s full midi skirts!) or Divorce (those coats and silk flaral dresses…); or Sofia Coppola’s slightly preppy monochromes; or Victoria – always Posh to me – Beckham’s cashmere turtlenecks and wide-leg pants? Or will I be crazy brave and go for Solange Knowles and her awesomely, amazingly bright collection of clothes that I suspect only she can wear that well? These are tough decisions to make on a train. 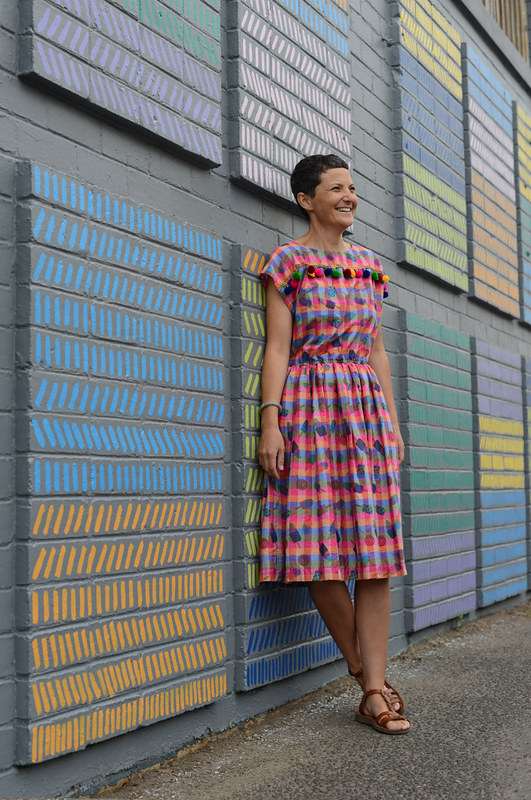 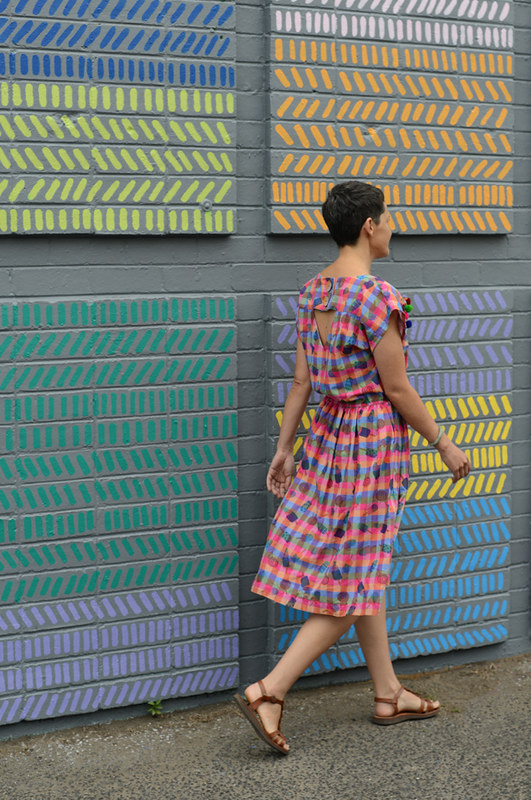 And it’s not always famous people in magazines whose outfits I covet – I also often experience bouts of style-envy when it comes to my friends. And none more than this one, our lovely guest sewing buddy Kimberley. I’ve known this woman since our firstborns were tiny little terrors, and without fail every time I see her I want to steal what she’s wearing, lengthen it by a couple of inches, and call it my own. EVERY TIME. So when we got to craft camp late last year and she pulled out this multi-coloured check with a spotty lollypop and icy pole print and announced she was going to make an 80s style dress and add a string of pompoms, I should have been straight on board. But I’ll be honest – I had some doubts. I’m not usually a fan of novelty prints. I’m wary of the proportions of a lot of 80s patterns (so much emphasis on the shoulders!). And pompoms? How? Where? Why…..? I just couldn’t see it working.

A couple of hours later (talk about fast sewing) and best, sweetest, funnest dress was done and dusted and the naysayer had been slayed. Who knew discount novelty cotton from GJs could look this great? Kimberley – I’ll never doubt your sewing decisions again. 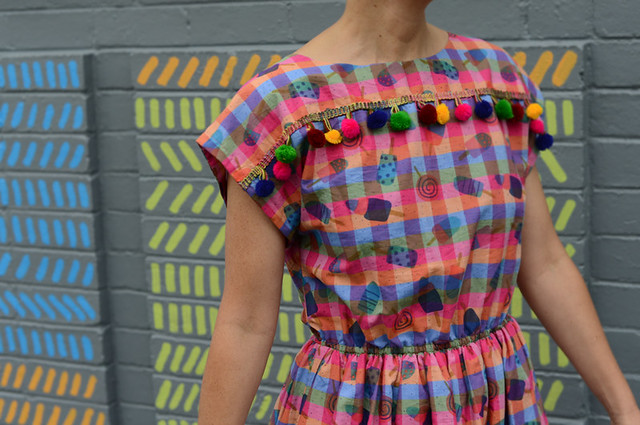 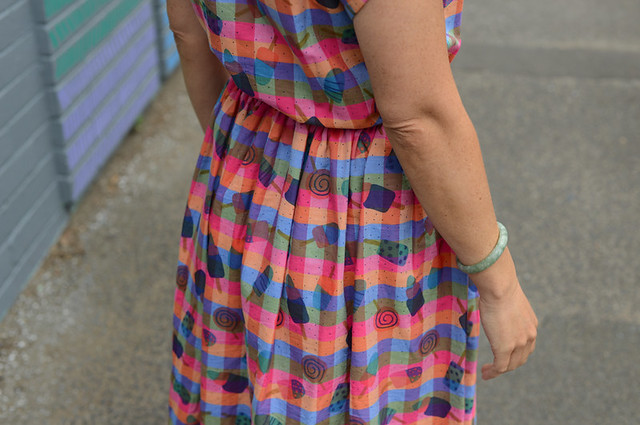 It’s now a few months since this dress was made, so details have become a little foggy. The pattern is Vintage Simplicity 8011-A an elastic-waisted dress with button-fastened back detail. As I mentioned before, the fabric is from GJs Discount Fabric, and I’m still quietly amazed that Kimberley had the skill to imagine it away from the kid print section and onto a dress. Respect. When it came to sewing it up, Kimberley said she followed the pattern without any changes, apart from lining the top instead of using facings. Lining is always such a barrier for me, but sometimes it really is easier than messing with facings and bindings, and it gives such a lovely, clean finish. She had no problems until it came to the buttonholes – because they’re so big they gaped, so she ended up sewing them closed because the neck’s big enough to slip over anyway. The pompoms were a final addition and how damn perfectly do they fit along that seam? They came from a department store in Tokyo a few years ago and look as if they’re custom built for this fabric. One small concern is how they’ll wash over time. Any advice from pompom experts out there? 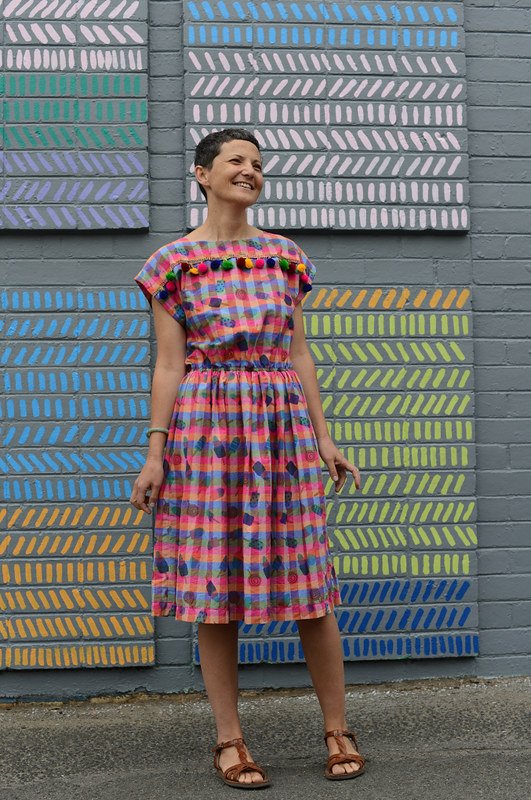 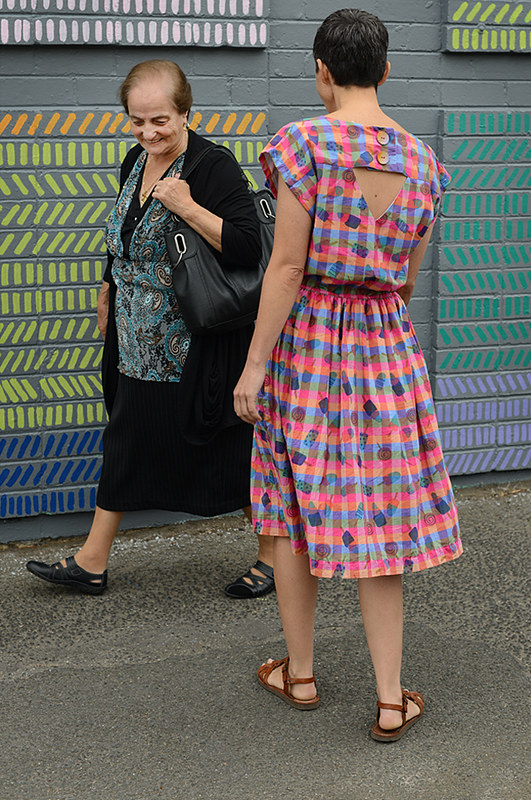 I can safely say this dress was a highlight of that craft camp, and I spent my entire weekend trying to make something I liked as much as the dress I had so deeply doubted on day one. Kimberley, if you ever get sick of it (and if there’s a decent hem that can be lengthened), I’ll gladly do a wardrobe swap. Just say the word. x 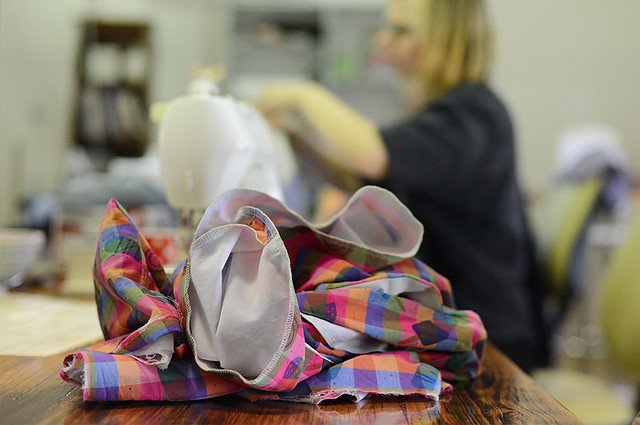 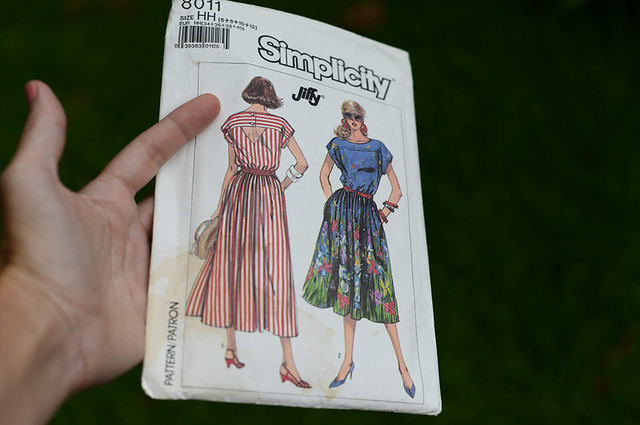