I’ve been having a major dose of 80s nostalgia lately – triggered by the terribly sad passing of George Michael, which has sent me plummeting into memories of kid-hood and teen-hood and everything that was amazing about that time. I took it pretty badly when George died. He had been my one and only for a couple of years and although it sounds stupid, I honestly felt as though I’d lost someone from my past who I intimately knew. Teenage crushes are so intense! At the end of a fairly troubling year, George’s death came as a final shock, and I spent most of Boxing Day in bewildered tears playing Freedom and Careless Whisper on repeat on my phone (which wasn’t easy to explain away at a lunch with the in-laws). 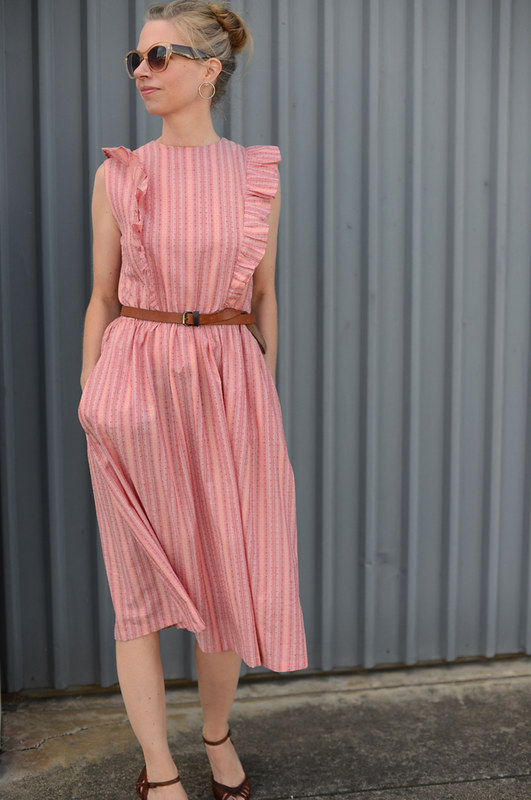 In honour of George, my summer of 80s celebration has included high rotation Wham!, Duran Duran and Eurythmics records on the turntable, a renewed interest in frosted pink lipstick and blue mascara, a flirtation with bigger earrings and bigger hair….but sadly, not an 80s revival in my wardrobe. Because no matter how much I love that decade, I can’t bring myself to re-do the clothes. I’ve dabbled, I admit. I bought a pair of mum jeans and wore them for a while before catching myself in a mirror and thinking for a brief, terrified, second it was my own mum circa 1982 I was looking at. I’ve wondered whether I could do a stirrup pant again (answer: no). And I’ve spent long moments contemplating batwings, big shoulders and baggy-skirted vintage sewing patterns tucked away in the back corner of countless op shops. But nine times out of ten I stay strong and resist, knowing I won’t sew them.  That is until I stumbled on this dress pattern, Simplicity 5884, buried deep in a second-hand pattern pile – and I jumped for joy. Because if there’s one aspect of 80s fashion I’m willing to forgive anything for, it’s the ruffle. Oh yes – more ruffles. I’m not nearly done here. 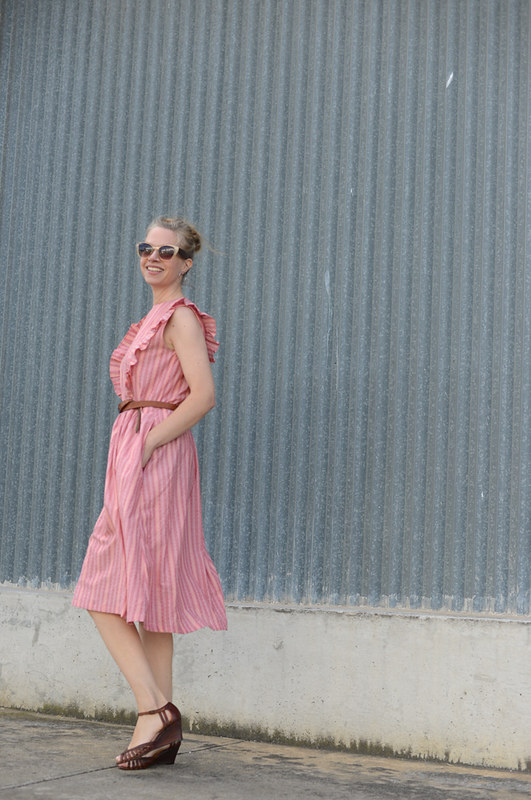 The moment I spied this pattern I knew what fabric I’d make it in: this light, slightly nubby striped cotton that I bought from The Fabric Store late last year. I love the subtle colour mix on this fabric, and the slightly picnic rug-ish vibe of it. Just made for a sundress, and very ruffle-friendly.

Making the dress was fairly straightforward, I admit I struggle a little with the terminology in some older patterns, but this is a pretty simple make so even I could cope. I opted for View 2 – sleeveless with a single ruffle, my love of this pattern doesn’t extend to those puffball sleeves! – and made no changes. The neckline, back fastening and armholes are all faced which makes a pretty neat finish, but other than that it’s a very basic pattern, albeit with a fair bit of the dreaded gathering required on the ruffles and skirt (although since discovering the power of three rows of stitches to gather, this task no longer scares me). My fabric is a little see-through in the sun, so I’ve realised I should have lined the dress, but I guess I can wear a slip. 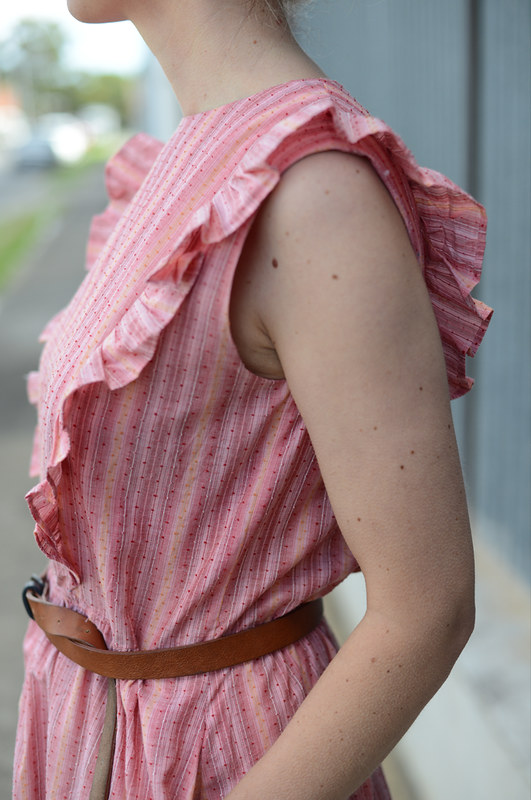 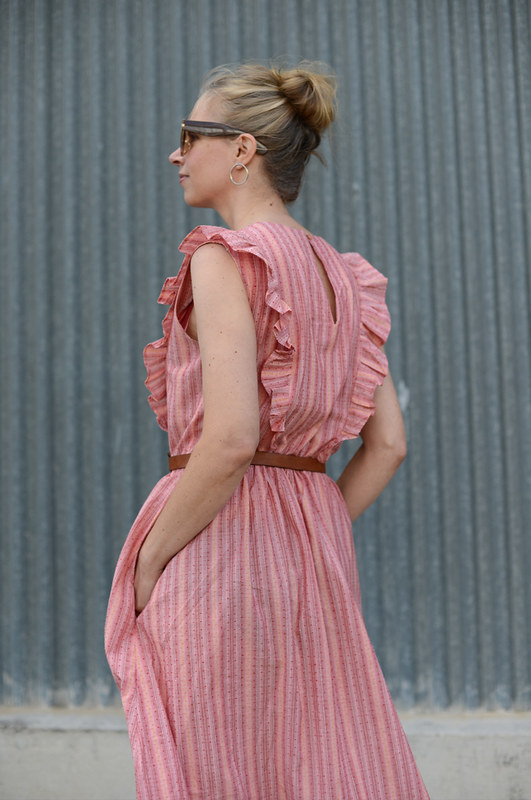 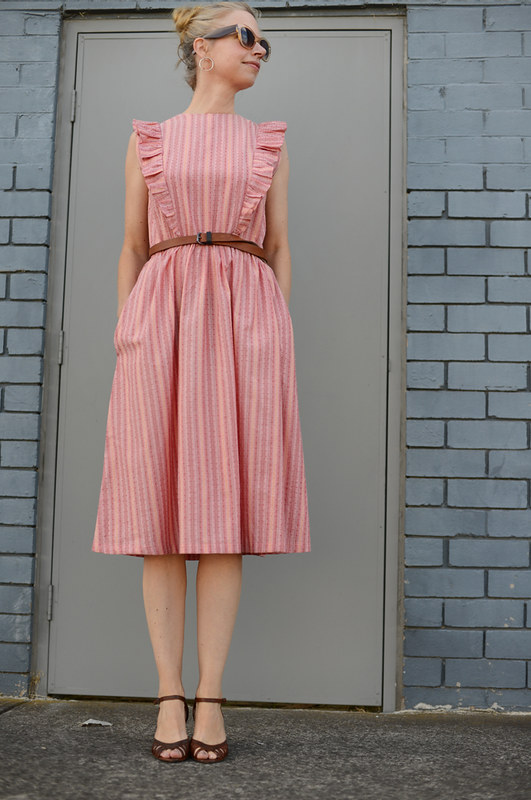 Without a belted waist, this dress looks like something straight out of Juniper Creek. While I’ve admitted before I’m partial to sister wife ‘accents’, I couldn’t bring myself to go full Big Love, so I added a row of narrow elastic to the waist seam, by zigzag stitching it straight up against the inside seam. Not the most perfectly professional of solutions, but it’s quite a neat and easy trick that Klarissa showed me, and I’m not too concerned with a perfect finish as I suspect I’ll always wear a belt with this dress anyway. Just not a wide elastic belt with silver stud buttons. Because that’s way too 80s for anyone.
RIP George x 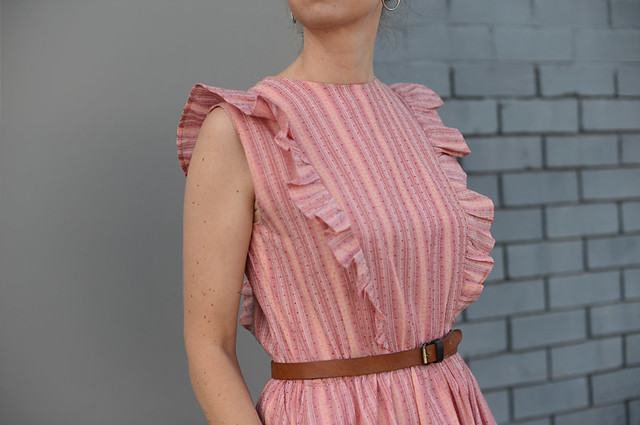 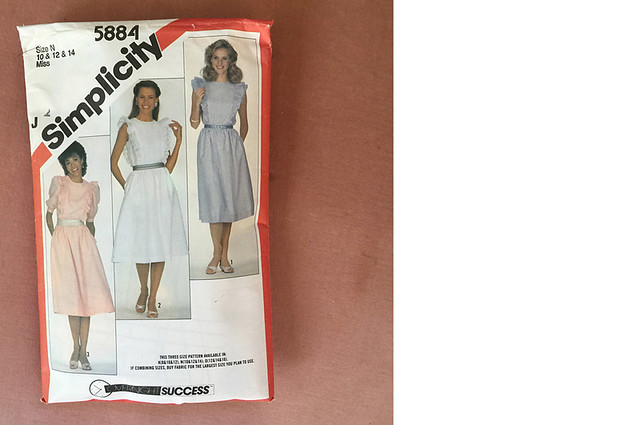