Recently someone referred to me as… ‘the one who sews tops’. Ouch. Mostly true but I do have proof here on Bombazine of the odd dress and skirt! I’ve always wanted to sew pants but I’ve been a little intimidated. Scared is probably the word. Because if there was ever a piece of clothing that needs to be properly tailored I’d guess it was pants. For anyone attempting them there’s the extra work of measuring, fitting and fiddling with a toile. But I’m not a standard size (whatever that is!) so I’ve always known there would be lots of extra adjustments in store. 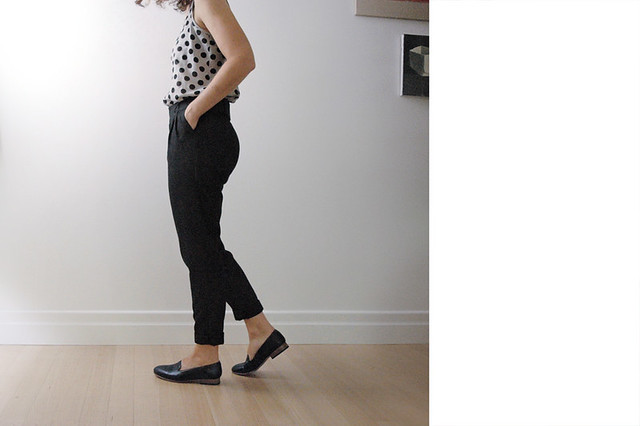 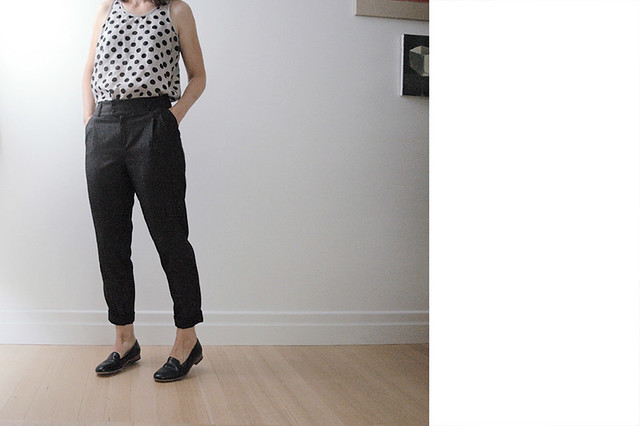 So I’ve avoided making ‘proper’ pants (elastic-waisted ones don’t count); I’ve accepted my RTW pants never fit well; and I’ve gotten used to wearing jeans and pants with bulky excess material dragged in by a belt. But all that changed recently when I had a pair of jeans fitted and custom-adjusted. It was a revelation (no belt needed!) – and I decided it was time to face my trouser fears.

I chose the Gilbert pattern from Republique du Chiffon – a slim, tapered shape with a zip fly and a welt pocket. One again it was hard to go past the shape and fit that RDC is so clever at – their patterns are contemporary but I feel they draw on tailored shapes of the past. If you speak French (I don’t) I noticed the instructions look minimal. The pattern pieces are hand drawn but accurate.

The material I chose is a pure wool in a black and white weave from Rathdowne Remnants. It feels very light and has a gorgeous drape for a wool. 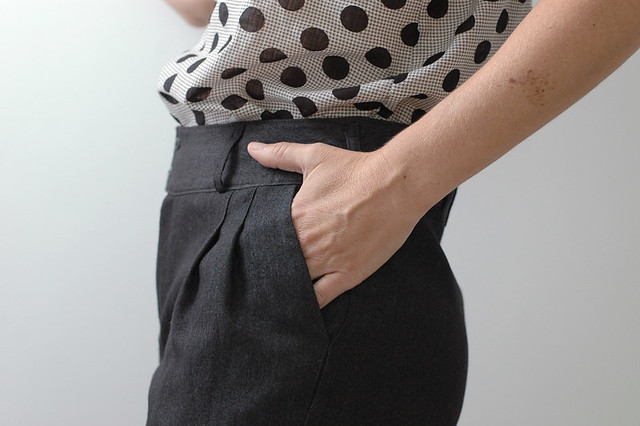 And so to the tailoring. It started early – it only took a little tape measure work to realise the pattern was for a sweet little French derriere. I needed to make a full butt adjustment (or lengthen the rise) as shown in my favourite sewing book, ‘Metric Pattern Cutting’ by Winifred Aldrich. This was so simple and worked a treat. I also narrowed and lengthened the leg and took in the waist.

At toile stage I tested the front pleats and discovered they weren’t very flattering (on me – they look great on all the other versions I’ve seen). On my leg they accentuate the front upper thigh curve, which needs no further accentuation. I moved the pair of pleats around closer to the pockets. 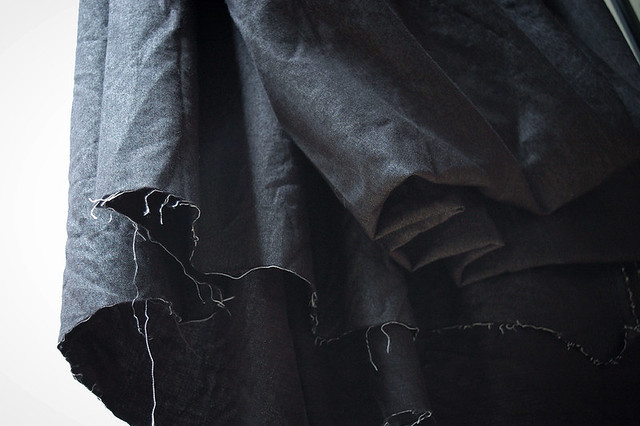 I’ve made endless boy pants because my son is such a skinny bean and making is easier than trawling shops – so quite a few years of zip and waistband practice paid off when it came to making these. (That said, the little rotter always pulls them off without EVER opening the button or zipper!)  I use Ottobre’s simple and concise zipper instructions from one of their magazines, but there are lots of other tutorials out there.

I made a few tiny changes during the make: instead of the hook and bar clasp I chose to use two small buttons; and I positioned one set of belt loops right on the side of my waist. I think they bulk up the waistline silhouette, next time I’ll move them to the back slightly. 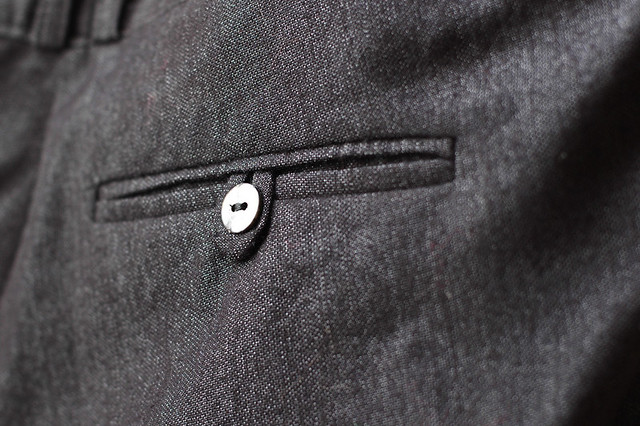 The double welt pocket is my favourite detail. I’ve said it before – I really do like making a welt pocket (weird, I know) – that slashing into the pant piece and inside-out mystery foldwork has me on my toes, and every  single time I’m shocked my welt actually worked. There was no way Google translate could help me follow RDC’s French welt instructions so I used this great Craftsy tutorial.  Sadly my top welt turned out slightly smaller than the bottom. Usually I force myself to unpick mistakes but a double welt was too much to face. Also, it’s on my behind so I can’t stare at my mistake. Let’s just say it never happened. 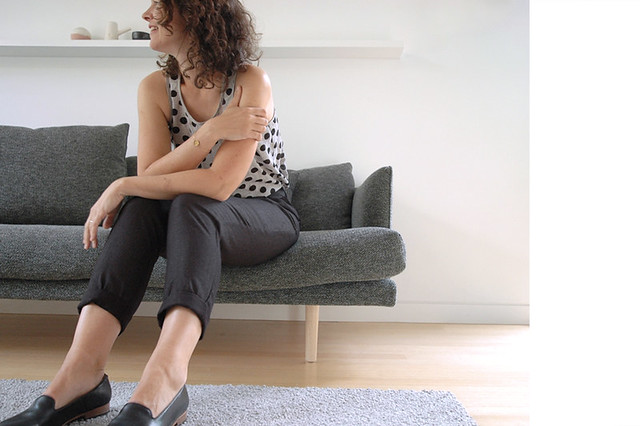 So now I have my first pair of self-made pants. I was pleased to discover they were less work than I expected and came together quite quickly – even when you factor in the toile. The fit is better than I expected BUT there is much room for improvement (I’m even more in awe of the outrageously perfect fit on Kimberley’s tropical pants we showed recently). I’m pretty keen to try another pants pattern – hell, I might even try one in English. But for now I think I’ll go back to my comfort sewing and make another standard size 12 top. To go with my pants. 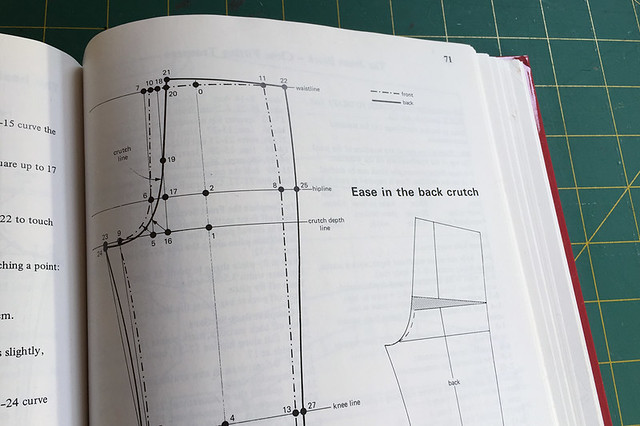 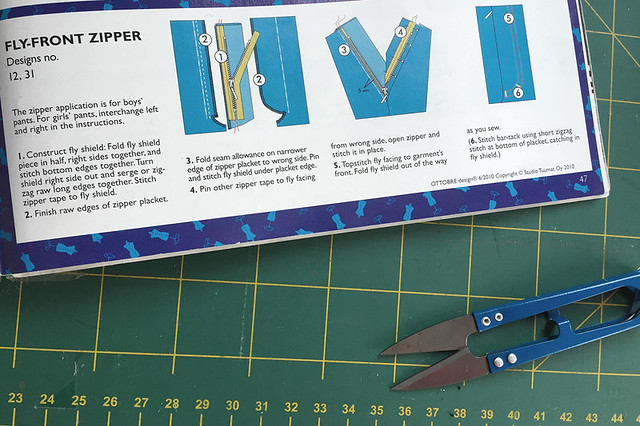