You may be able to gather from these photos that our collective kid squad is rather girl-heavy. We have these four between us, with one sweet and slightly bemused boy slap bang in the middle (who’d rather eat worms than pose for pics in a home-sewn tee). 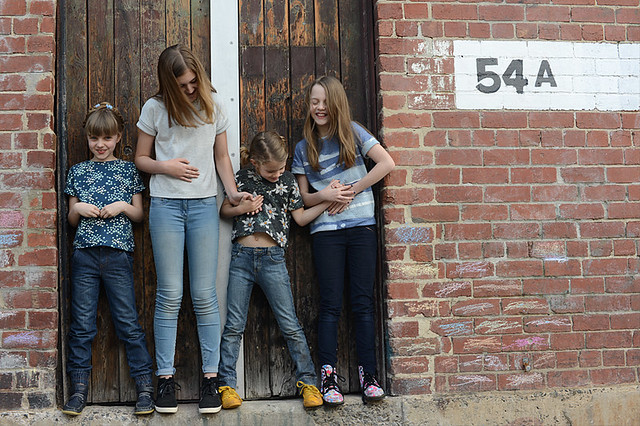 The whole girl thing came as a bit of a surprise to be honest. Klarissa and I are both only girls with a couple of brothers each. We’ve known each other since we were toddlers – we grew up one house down from each other on a street that was teeming with boys (I think that’s how we started crafting as kids – it was our two-person safe haven from all that testosterone!). Both our partners come from boy-dominated stock. I always assumed that if kids were on the cards for either of us, chances are they’d be of the XY variety. Shows how much I know (nothing!).

Luckily for us these four girls are firm friends; and it’s been really so much fun watching all five small people grow up together. There’s something quite special about the kids of someone you’ve known since you were a kid yourself – they feel like extended family. And in this case, that includes clothes-sharing. A few prized items of clothing and special knits have passed down to all of these girls, other bits and pieces have bounced between a couple and their cousins (oh yep – lots of girls there too). Japanese dress pattern books have been borrowed back and forth, vintage kid patterns swapped, hand knits have been worn ‘til the sleeves don’t reach past one kid’s elbows then washed and handed on to the next in line. 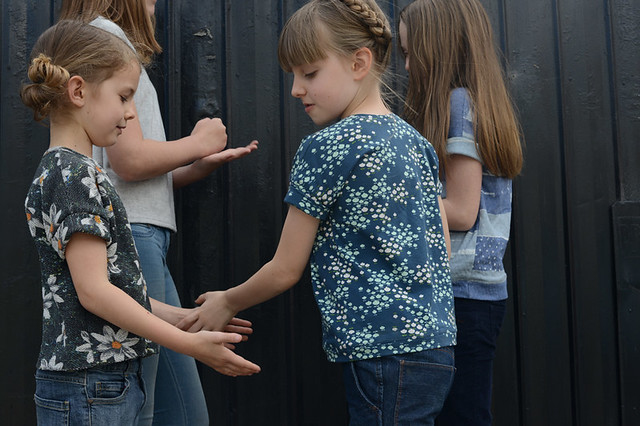 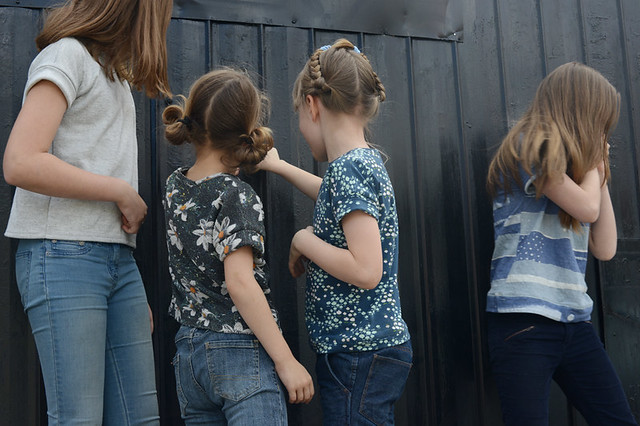 But there’s never been one particular item of clothing or pattern that they all like or can wear at the same time. UNTIL NOW. At the risk of sounding slightly obsessed with one pattern – I think we’ve hit the jackpot with the Oliver + S Lunch Box Tee. Because look at them all, happy as clams: the almost-teen, the tween, the middle-schooler and the mini – all wearing the same t-shirt. Willingly. It’s a miracle! 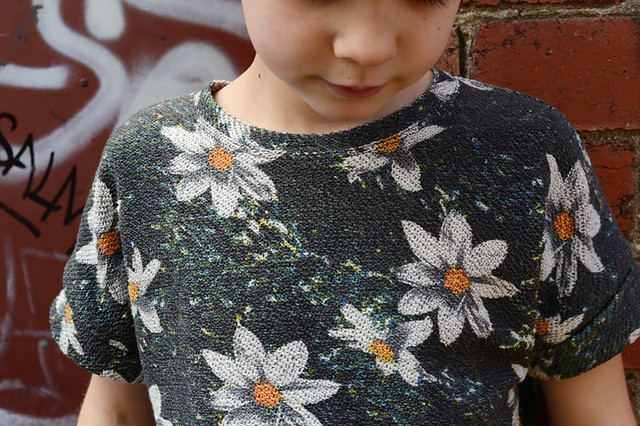 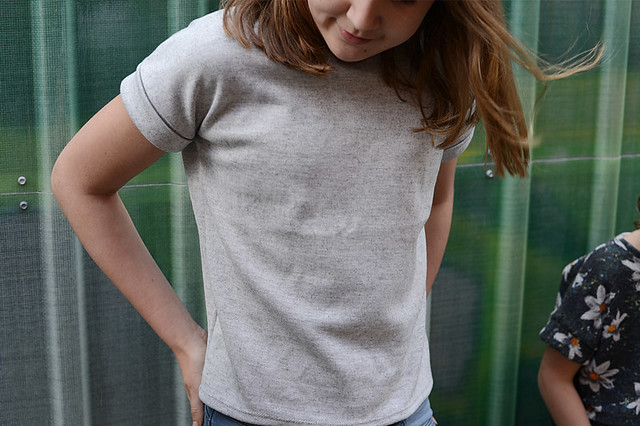 The four tees pictured evolved fairly organically, there wasn’t much planning involved. From smallest to tallest, this is how it went: The mini got her first Lunch Box a while back, and immediately started begging for another. Her second version is a scrap-bust from a leftover floral knit originally used for these mini Hudsons. It actually works better in a tee – that loopy knit got quickly shredded in the knees of the pants. I bought the sweet blue printed Art Gallery Fabrics knit from the Drapery a while back, to make something for the tween. But I accidentally printed my pattern out at 80 per cent and made what I thought was a size 10 before realising it was more like a 7. Oops. The middle-schooler scored the tee, and the tween needed serious compensation to get over the injustice of it all. I dug deep and found some leftover blue and silver Nani Iro knit from a couple of years back that just stretched to a tween tee. Phew. Finally, the almost-teen wanted something simple – she scored some leftover grey and charcoal double-knit that was originally used (in reverse) for this Nani Iro Recipe No 5 top. 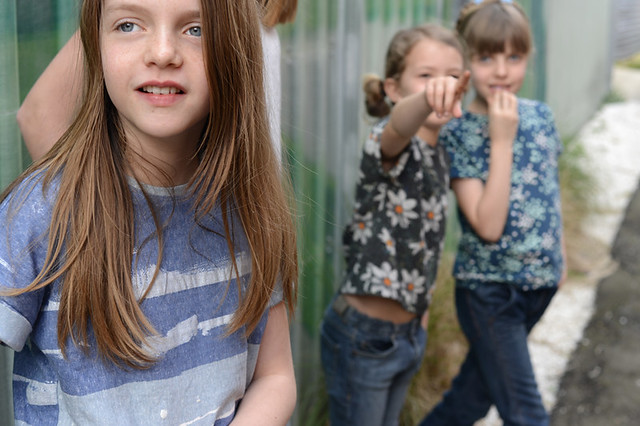 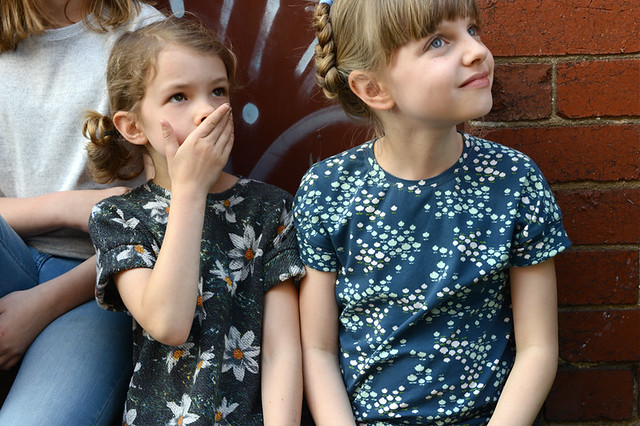 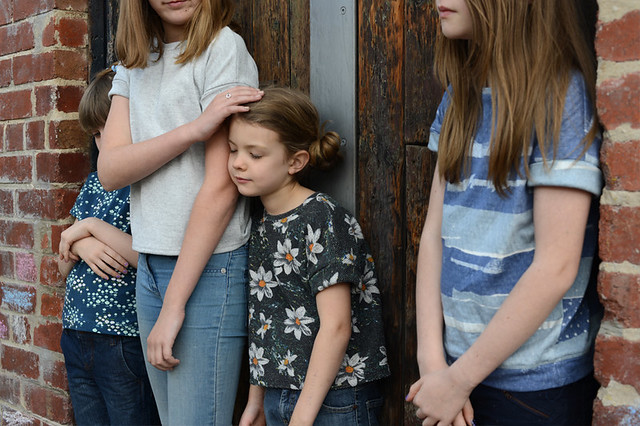 All of the makes were the standard pattern, but I added waistbands to both of mine because the pattern is quite short and my pair didn’t want bellybuttons on display. It distorts that lovely boxy shape a little, but I knew they wouldn’t wear them if they were too short. Klarissa stuck to the pattern for both of hers and is happy with the shape – but a little worried the grey one will be a crop-top by summer. The good news? Chances are when she outgrows it she can hand it down to the next girl to wear…! 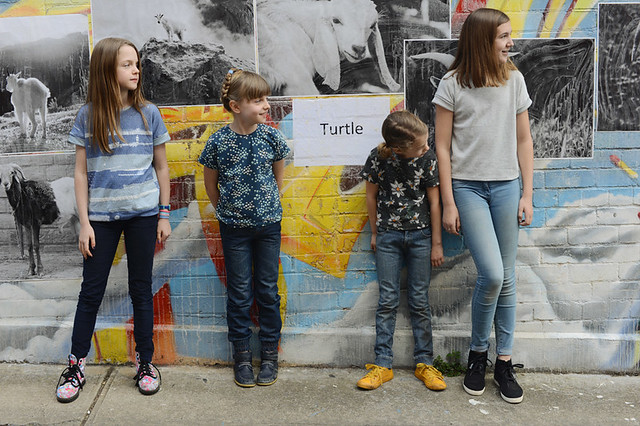 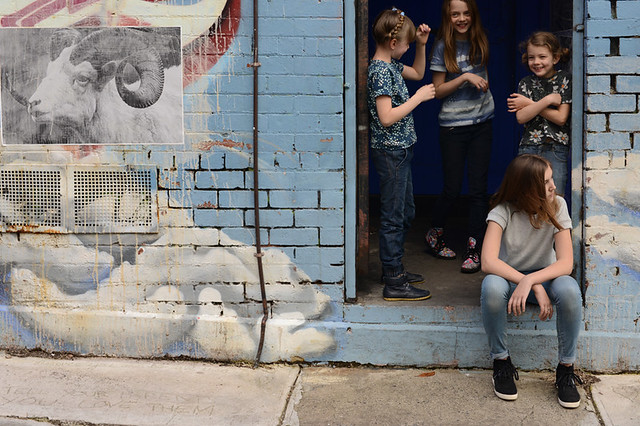