When we were planning a trip to Japan this year, up on the wish-list along with fabric shopping and gyoza eating was learning more about our favourite pattern books. It’s no secret that we’re massive fans of Japanese sewing books, and of all the books we’ve collected over the past 10 years, the copies most thumbed through, marked, traced, traded and translated (arghh!) are by Yuko Takada. From She Has a Mannish Style to I Love Tops and I Love Pants, we just love the slightly tomboyish, modern aesthetic and laid-back styling. Oh, and the pattern drafting is sublime.

So with nothing to lose we dropped Yuko Tadaka a line, and before we knew it we’re in Japan,  traipsing through torrential rain in downtown Tokyo to reach Yuko’s studio, stressing about looking like drowned rats in front of one of our sewing heroes. There are so many things we want to know: What’s the sewing scene like in Japan? What are the tricks to a professional looking home-sew? And exactly what is ‘mannish style’…? 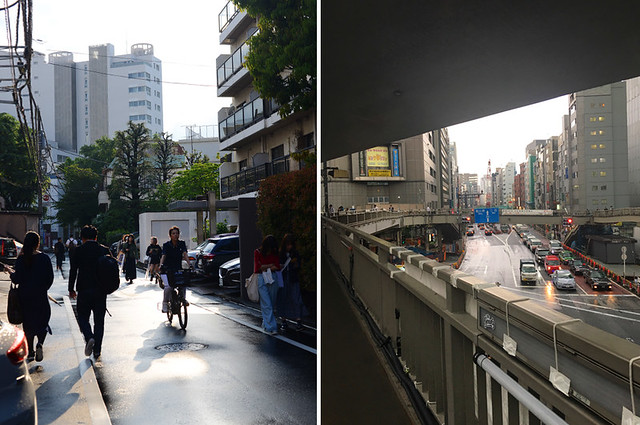 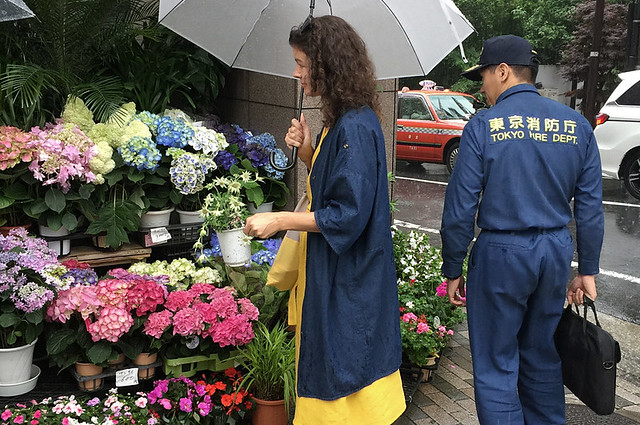 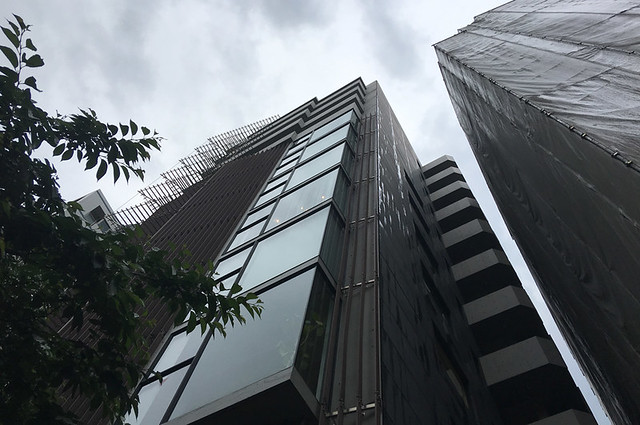 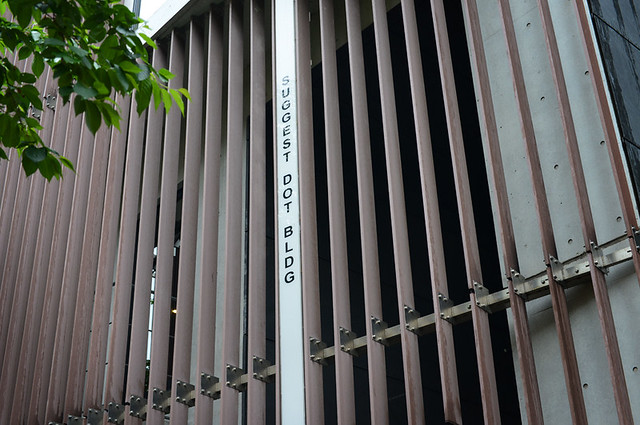 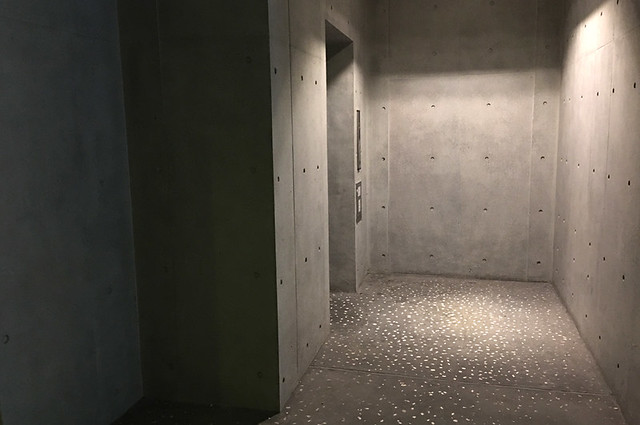 We’re met at the studio door by Yuko and her publisher, Bunka Publishing Bureau Manager and Editor Nobuko Hirayama, both super stylish with Yuko wearing TAGE, her womenswear brand. The studio is a tiny room in a very impressive, concrete-y, architectural building near Ebisu Station. The small space is filled with a desk, a pin-board covered in hand sketches, a sewing machine and a couple of racks of clothing – the latest range from TAGE and a collection of original pieces from Yuko’s pattern books. For a moment I seriously contemplate sweeping everything off the racks and making a run for it – it’s all so good. 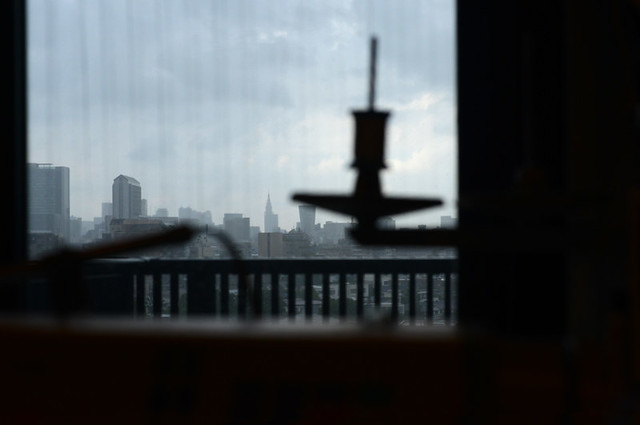 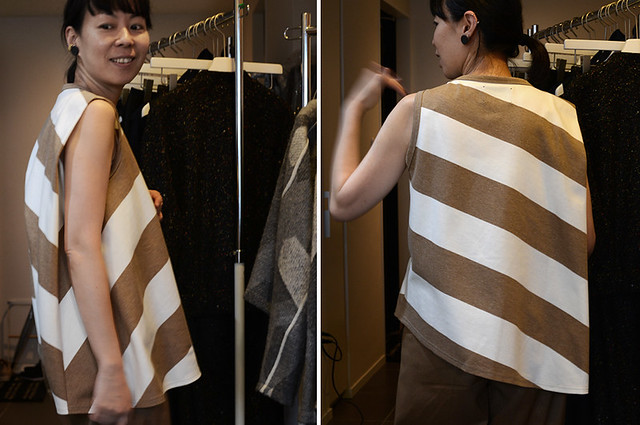 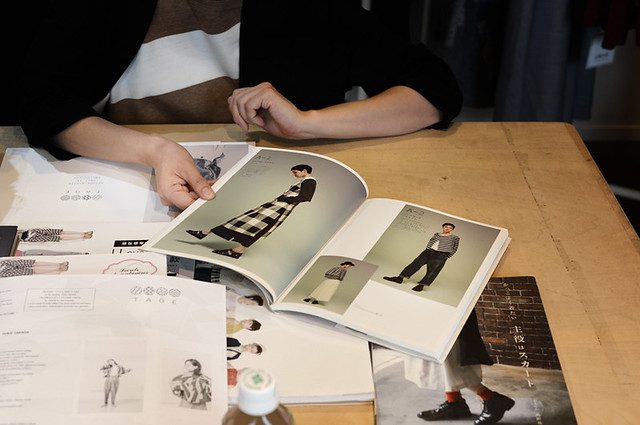 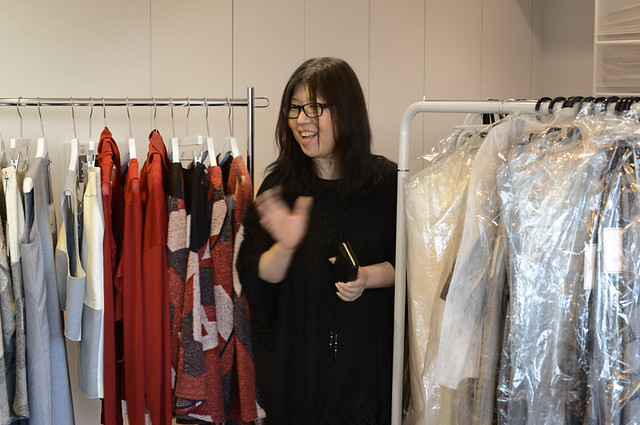 Both the TAGE and sewing book garments share a similar style: modern and clean with curved and panelled details, relaxed, unfussy shapes and slightly androgynous silhouettes. ‘Not too sweet’ is how Yuko laughingly sums it up when we quiz her on the ‘Mannish’ title of her best-known book. She’s a little perplexed at its English title, She Wears the Pants – especially when we explain it means a bossy, dominant wife. ‘The Japanese title is difficult to translate,’ she says. ‘Our translation is very casual – sometimes you might wear what boys wear, other times not so much. It’s not a whole style, just a lot more casual. Not as strong! Not as serious!’

Translation quirks aside, Yuko’s words pretty aptly sums up her approach to clothing, which she developed while studying at the very prestigious Bunka Fashion School in Tokyo, and then working for Japanese designer Kei Kagami in London. Her time at Kei Kagami had a huge influence, exposing Yuko to a template for designing and making that she would replicate back in Japan.

‘At the Kei Kagami studio they were doing everything with their own staff, without using a sewing factory: using their own sewing machines, making samples, and producing garments. And I was designing, making patterns, I was even sewing, making the finished product as well. They were going from zero to ten – from making their own samples to producing complete products and handing them to customers, it was all done only by the in-house staff,’ she explains.

‘I thought that the garment making that was being done there was the most fun experience – that  experience from zero to ten. To make things yourself and have that chance, it was a wonderful studio. At the time I thought “THIS is the origin of clothes-making”, and after that I came back to Japan and founded my own brand called TAGE.’ 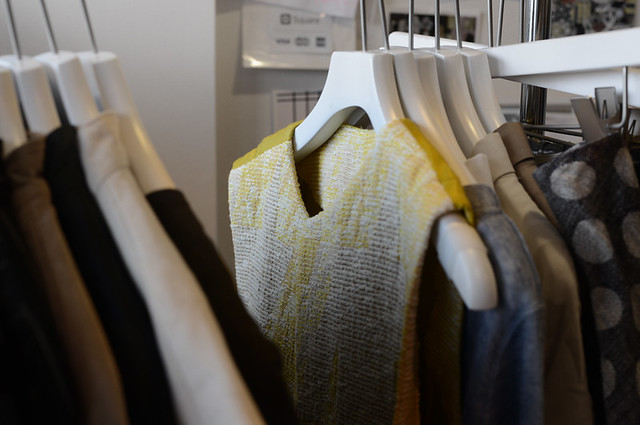 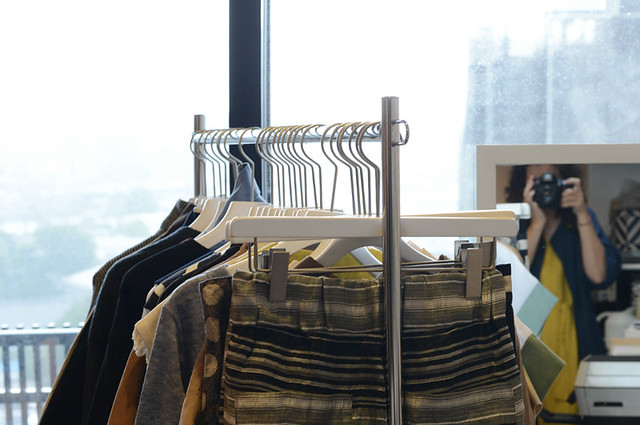 Yuko oversees every aspect of TAGE, starting each collection with the design of fabrics, which she has custom-produced in Japan. She points to a black embroidered fabric she designed for the AW17 as an example – it was made in a small factory in Okinawa and is just lovely. Once fabrics are designed, Yuko drafts patterns, sews samples, manages production, oversees the brand website and represents it at fashion trade shows. She is literally a one-woman show, which is how she ended up  authoring pattern books.

‘When I started TAGE, there wasn’t really anyone around who could design, make patterns AND sew. And because of that I was asked, “Why don’t you put out a book?” And that’s how I wrote Mannish Style – the experience of being able to do those three things myself led me to writing the book.’ 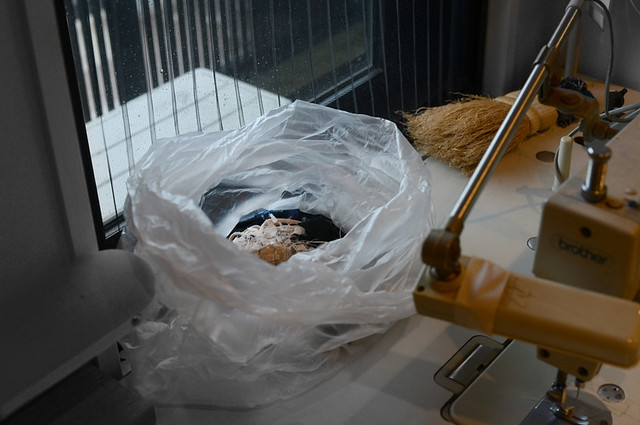 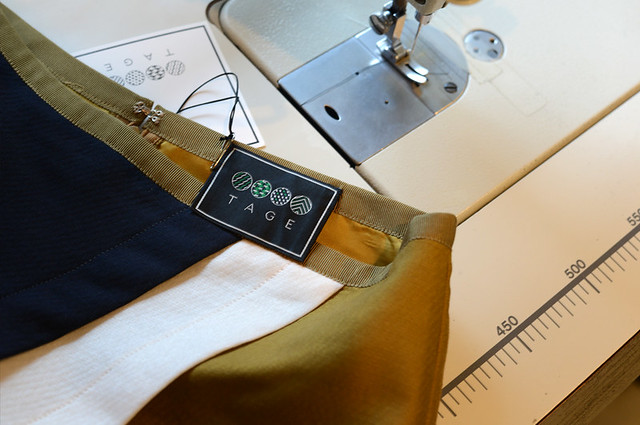 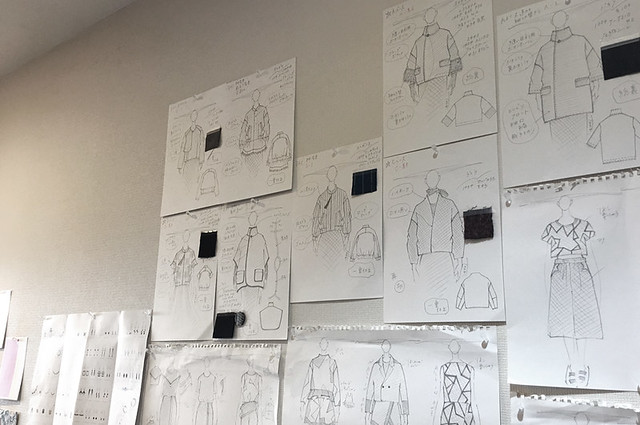 In a sea of Japanese pattern books heavy on girly sack dresses and super-sweet styling, Mannish Style stood out, both in Japan and further afield. English and French translations followed, along with a growing international fan-club which Yuko is slowly becoming aware of. ‘Sometimes I get emails [from overseas sewists],’ she says. ‘They email with sewing problems: “I don’t understand how to make this step on page 5!”’ Her subsequent books, I Love Pants and I Love Tops are also firm favourites among many indie pattern-loving sewists around the world, along with her latest, Play with Patterns. 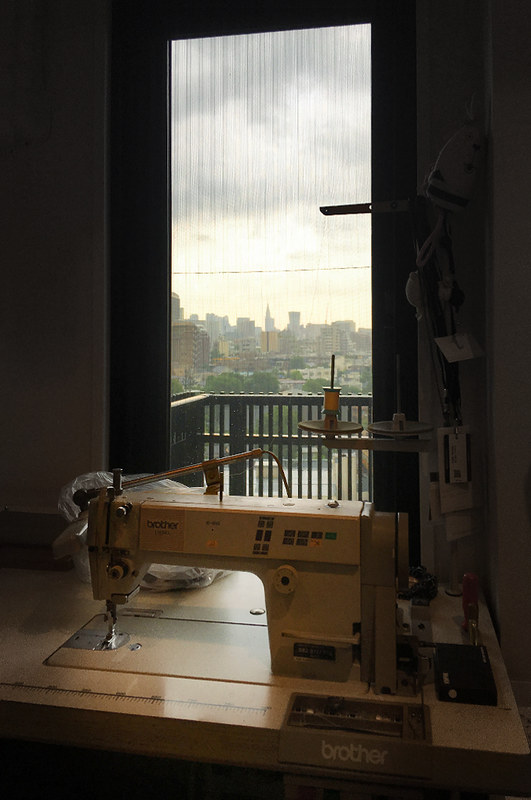 What about the sewing scene in Japan, I ask. Who sews? ‘It used to be the grandma that teach the child how to sew but that’s no longer,’ she says. ‘Now the younger people, like 30s and 40s, they don’t sew – it’s mainly fashion school students and very young people who are interested in fashion and want to wear not normal people’s clothes. They want their own characteristics.’ Yuko sometimes spots her patterns out and about on the streets of Tokyo, but has never approached the wearer. ‘I want to, but no – too shy!’ she laughs. 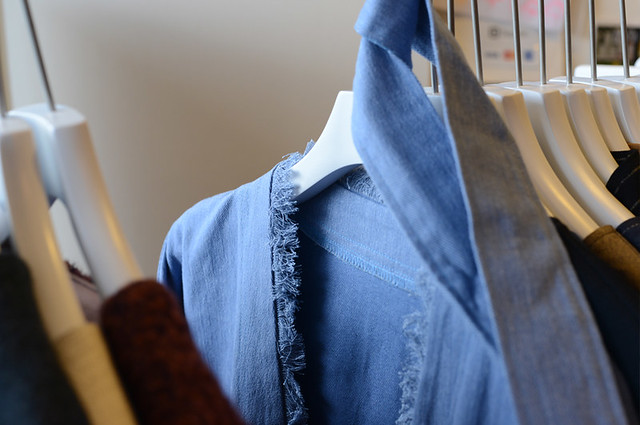 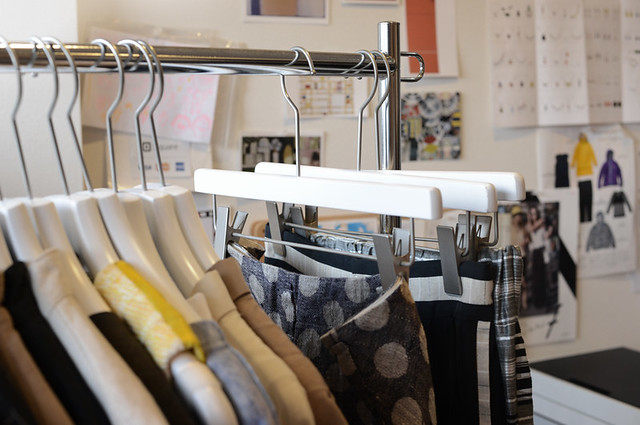 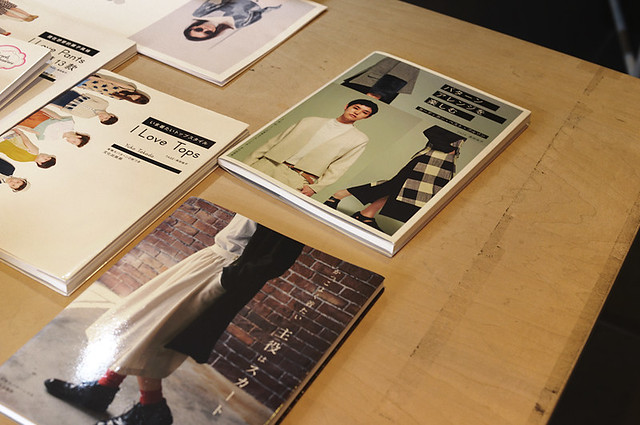 As someone who went straight to fashion school after just a couple of apron-making classes in high school, Yuko’s home sewing days were limited. But when we ask her for advice about how sewing enthusiasts can make our garments look more professional, she has plenty to offer:

‘The sewing is of course important, but more than that, probably choosing the right fabric for the design,’ she says. ‘Thinking about what kind of fabric would best suit this design – I think that’s how you begin to make beautiful clothes. And then after that, there’s the sewing, the cutting, everything involved in actually making it. The trick of it? I think just not thinking too much about it. Just actually doing it moves you forward and if you slowly move forward, you can make something beautiful.’ 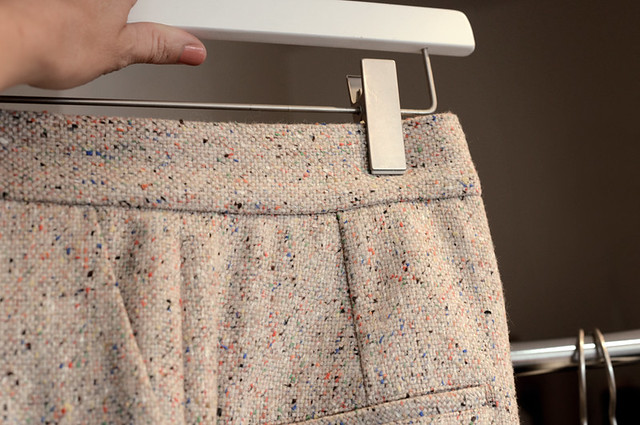 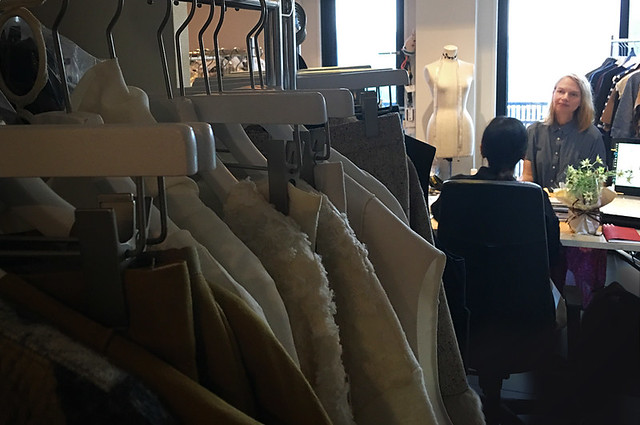 But before you start thinking it’s all about a zen approach, Yuko says there’s one very practical step that can turn a home-sew into something special: ironing.

‘One important thing is the iron. The press. I think that is really, really important,’ she says. ‘Approaching the clothing neatly, and lastly pressing everything well. This is what makes things come out well. Keeping the neatness of the process consistent in each part. Sewing a section and then using the iron. Sewing another part and then using the iron. I think this is one of the tricks to making beautiful clothes.”

As Klarissa and I quietly vow to do more ironing, we say our thanks and prepare to leave, clutching gifted copies of Play with Patterns and a skirt book (which Klarissa tragically left behind in a rush to get her wet shoes back on. Wah!!). On the way out I ask Yuko if she has plans for a new pattern book, and when she shrugs I suggest that ‘I Love Dresses’ by Yuko Takada would be a bestseller. Yuko and Nobuko both laugh, but I like to believe I’ve planted a seed. And if that book ever hits the shelves I promise I’ll sew every darn dress in it – many times. Because I’m absolutely convinced that slightly mannish, exquisitely designed dresses with quirky details will be AMAZING. 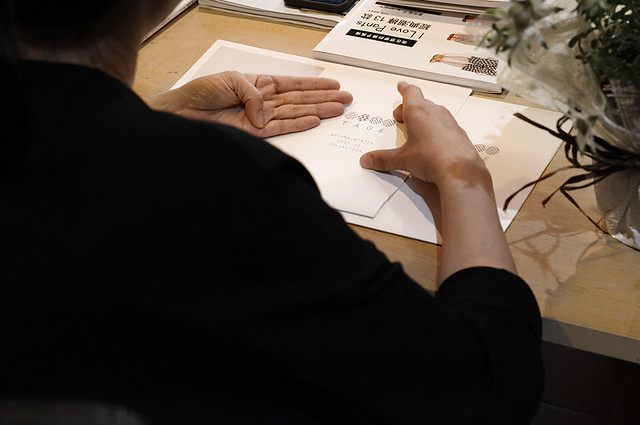 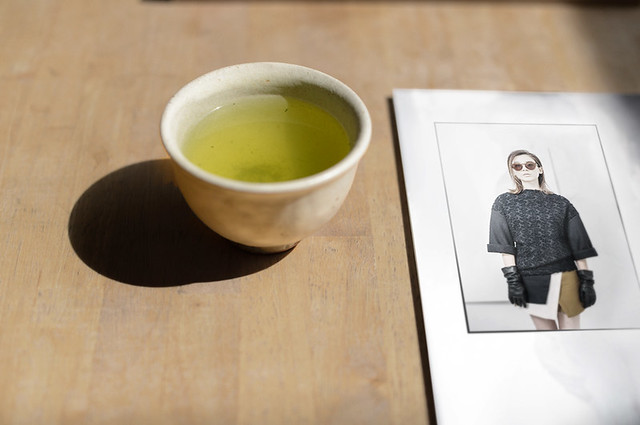 Thank you Yuko and Nobuko for hosting us, and apologies this story has taken so long to post! And thanks also to my lovely brother-in-law Tim who did some translations from his home in Himeji. Arigatogozaimashita!